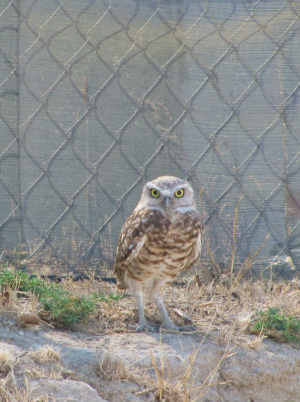 We focus specifically on nearby western burrowing owls. This species has been on the decline for the past few decades locally, mostly due to loss of habitat – now, there are less than fifty pairs left in San Diego County. Recent surveys show that owl populations have dropped by 27% in California’s Imperial Valley alone. These numbers represent the overall decline of this species in the American West.

According to the Voice of San Diego, “The … Multiple Species Conservation Program … offers [burrowing owls] robust legal protection … [The species is not federally listed at endangered.] State officials rejected a petition to list the owl as endangered in 2003. So it is left to the habitat plan, which calls for new construction to avoid impacting numerous species, including the owl, whenever possible.

But some biologists say the burrowing owl is slipping through the cracks of that plan, which has been lambasted by a federal judge since its adoption. Across California, the tiny owl's population has dropped precipitously in the last three decades. During the 1980s alone, 60 percent of the state's burrowing owls disappeared. The owl's decline in San Diego County has been starker, dropping 85 percent since the early 1980s. Today, scientists estimate that no more than 92 owls still live in San Diego… The owl's population in San Diego was not supposed to reach this point. Like many declining species in San Diego, the owl's numbers have been reduced by human development and the resulting loss of habitat. But those conflicting interests were supposed to have been addressed in the late 1990s, when San Diego adopted a landmark plan that aimed to balance development and species protection.”

This decline has become a national dilemma. Burrowing owls are considered endangered in Canada, threatened in Mexico, and a species of special concern in Florida and most of the western US. Although they are only a small subspecies of American owls, they greatly impact their surroundings, helping to control populations of insects, rodents, and small mammals.

Originally, we sought to increase public awareness of the plight of the burrowing owl not just throughout the American West, but in our own community. We thought about contacting local government officials and mass-distributing flyers at public venues, however, quickly it became clear that the most effective way to truly “save the burrowing owls” was by doing some field work.

After we realized the World-Famous San Diego Zoo had a burrowing owl exhibit in their Safari Park, we wrote them a letter asking whether they would want our assistance in any future projects involving the Athene Cunicularia. In January, we received a letter from a top curator expressing the San Diego Zoo and Safari Park’s interest in working with us. Later on, in March, we received correspondence from one of the scientists working on a ground squirrel/burrowing owl project in Otay Mesa. She invited us to join in their efforts. This is a prime field work opportunity, and an interesting scientific experiment, as well. We finally have a chance to help the burrowing owls directly! This new “initiative/project”, which we named Operation HBO (Home Building for Owls) will involve using local CA ground squirrels as eco-engineers in the building of nests for local owls.

Additionally, in the coming months, we plan to organize more fundraisers (one swap meet plan to hit, for example, is the CCA Swap Meet in May) and sell more burrowing owl-themed merchandise.

Currently, our merchandise consists of owl-themed plush key chains. We also have produced several T-shirt designs. In the future, we hope to sell jackets, a greater variety of t-shirts, stationery, and other types of products to raise funds for S.T.O.P.