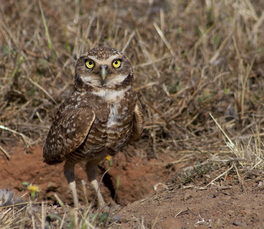 Image courtesy of Randy Bayne on Flickr
The Western Burrowing Owl has been on the decline for the past few decades in San Diego County most prominently due to loss of habitat – now, there are only approximately fifty pairs left. Although burrowing owls usually have a life span of about ten years, recent surveys show that owl populations have dropped by 27% in California’s Imperial Valley alone. These numbers represent the overall decline of this species in the American West.

The decline in population has become a national dilemma. Burrowing owls are actually considered endangered in Canada, threatened in Mexico, and a species of special concern in Florida as well as most of the western US. Although burrowing owls are only a small subspecies of United States owls, they greatly impact their surroundings, helping to maintain healthy populations of insects, rodents, and small mammals.

Today, many environmental activists consider the burrowing owl a “canary in the mine”. The fact that its populations are disappearing may spell doom for our ecosystems.

In 1980, around 600 burrowing owls lived in San Diego County. Today, there are just a few dozen left, and even these numbers are in fast decline.

The owl population in San Diego County began to drop when increased urban development quickly took over owls’ habitats and spurred ground squirrel eradication programs, greatly reducing available nesting sites. Additionally, since the burrowing owl relies on rodents like squirrels to create burrows for them, the persecuted squirrels took with them the owl’s best hope of recovery.  Environmentalists began worrying about the implications of the owls’ decline; after all, the burrowing owl is considered an indicator species for the health of the Southern California ecosystem, so its slipping numbers could hint at an ecological imbalance.

Under expert pressure, San Diego instituted the Multiple Species Conservation Program in the late 1990’s, but MSCP has proved largely ineffective: construction still kills dozens of owls by sealing them into or out of their burrows.  Worse yet, relocation efforts were thwarted by the owls’ refusal to move into new, artificial burrows. Then, in 2003, the Defenders of Wildlife petitioned the California state government to list the owl under the state’s endangered species act. Unfortunately, the petition was unsuccessful, and the Athene Cunicularia’s numbers in California (especially San Diego County) have continued to dwindle.