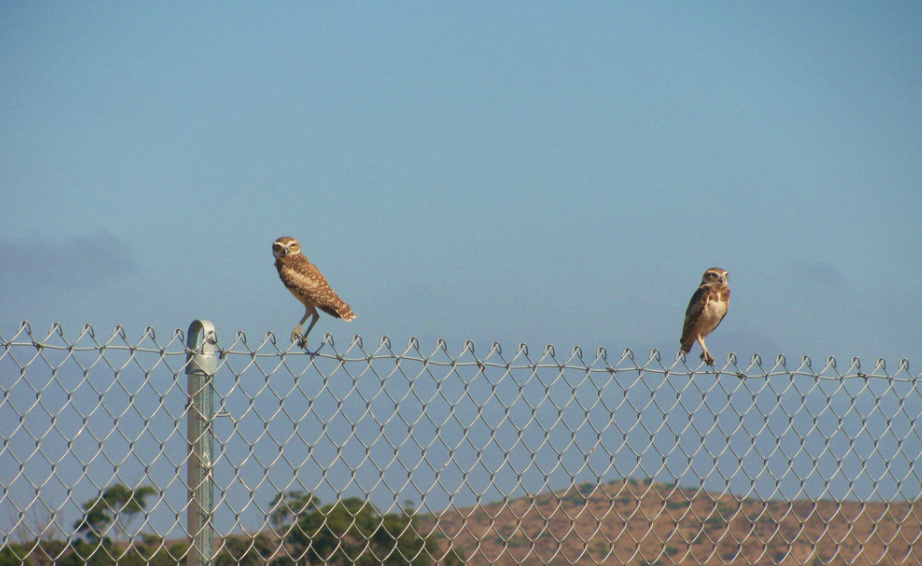 SOME WAISTLINE: Weighs, on average, around a scant six ounces… That’s less than half a pound!

SCAT? The Burrowing Owl puts mammal dung around its burrow. This attracts dung beetles… perfect for the owl to eat.

HORTON HEARS A “COO”: the song of a burrowing owl is, interestingly enough, a two-note coo coooo. Don’t get too dovey, though! It also gives off rattles, clucks, and chatters.

DID SOMEBODY SAY “NEST”? The Burrowing Owl forms monogamous pair bonds during the nesting season. They nest in rocky outcroppings, ground-squirrel burrows, drainage pipes, and artificial burrows provided by wildlife. The size of an Athene Cunicularia clutch (what you’d call a “litter” if you were referring to cats or dogs) is only three to twelve eggs.

BON APPÉTIT! :  The Burrowing Owl is an opportunistic feeder; although as with all species, its diet is heavily dependent on the inhabited region and the season.

During late spring and early summer, the Athene Cunicularia consumes moles and mice; in the fall and winter time, they move on to insects like beetles and grasshoppers.

HOME, SWEET HOME: The Burrowing Owl breeds from southern Alberta eastward to southern Manitoba, southward into Mexico. There are very few left in California, particularly in the state’s southern reaches.  Also resident in Florida and into the Caribbean and throughout South America. Unfortunately, they’ve gone extinct in a large proportion of their historic range. This species is ENDANGERED in Canada, THREATENED in Mexico, and a SPECIES OF SPECIAL CONCERN throughout most of the U.S. As a matter of fact, recent studies estimate there are less than 10,000 burrowing owl breeding pairs left in the world. In San Diego County specifically, there are less than fifty pairs left.

IT’S A GROUP THING… This species lives in loose colonies (about 100 yard apart) where adults take turns guarding the nest burrows. Unlike your average nocturnal owl, Burrowing Owls are active both day and night… particularly during the breeding season, which is typically around early spring.

*** In April 2003, the Defenders of Wildlife and other owl conservation organizations petitioned the California state government to list the owl under the state’s endangered species act. Unfortunately, the petition was unsuccessful.